prior to the caroni distillery finally closing in 2003, john barrett had the clear foresight and plethora of experience to set in motion the creation of first-class and legendary rums for bottling - to delight rum CONNOISSEURS of the future in the years to come...

After the purchase of Caroni Sugar Estates (Trinidad) Ltd by the British sugar giant Tate & Lyle in 1937, Caroni Limited was founded. Over 30 years later, the Trinidad Government purchased a 51% stake in the business. In 1973, Great Britain eventually joined the European Economic Community. Several of those European member countries required more stringent regulation of sugar exports from former British colonies, including a price cap. Big players in the EEC, like Germany and France wished to protect their sugar beet-based industries from outside the EEC competing products. Former colonies were only permitted to export raw cane sugar to the EEC and as a result, Trinidad could not capitalise on revenue streams from the Europeans.

In 1975, the remaining 49% stake in Caroni was sold to the Trinidad Government, who immediately renamed the company Caroni (1975) Limited and went on to serve their home market. From the 1980's, Caroni (1975) Ltd. tried to improve profitability through diversification, expanding the business into other markets such as fertilizers and rice. Unfortunately this only generated annual deficits that the government had to compensate for.
After 28 years, the State of Trinidad decided to liquidate Caroni (1975) Ltd. on July 31, 2003 and end its history of distilling.
"the rum market is very excited about bristol classic rum's caroni available from a number of bottlers, who have a wonderful selection, of our rare caroni beautifully packed."

Unique Caroni Maturation in The UK

Under John Barrett’s ownership Bristol Spirits shipped 10 containers full of the remaining barrels to England, where they were stored at his cellars based in Gloucestershire. The cold and moisture-rich conditions of the UK creates much slower maturation rates which naturally develop the Rum. John's expert opinion is that wood is one of the most important elements of the maturation process. Caroni did not invest in new wood, so this storage is much less reactive to the spirit. John explains "Barrels are a breathable instrument, having a life while contributing and improving their content. Warehousing environments really determine the spirit."
‍
John released his first Caroni selection in 2008, a rare 1974 thought to be the oldest remaining stock. Having securing the last few barrels of this age, enabling just less than 1,500 bottles to be released to market.
"This was real ‘drinking history’ as it was most unusual and difficult to mature stock of that vintage in the Caribbean.

John is not so keen on cask strength as he feels these drinks should be considered and appreciated. Anything over 70% ABV. is classed hazardous for transportation, so surely can’t be an enjoyable drink without dilute.
Bristol Classic Rum is proud to bottle at strengths around 47% - 55% ABV.

Over the last few decades, trade and many independent bottlers source their exciting, rare, unique and specialist Rums from Bristol Spirits Ltd and seek advice from M.D. John Barrett. Release of the remaining Caroni stock is extremely restricted - once it's gone, there is no more!

John has been gradually releasing his casks to market at their point of perfection for Caroni and Rum admirers to own and enjoy. His personal favourite is the Caroni 1989. 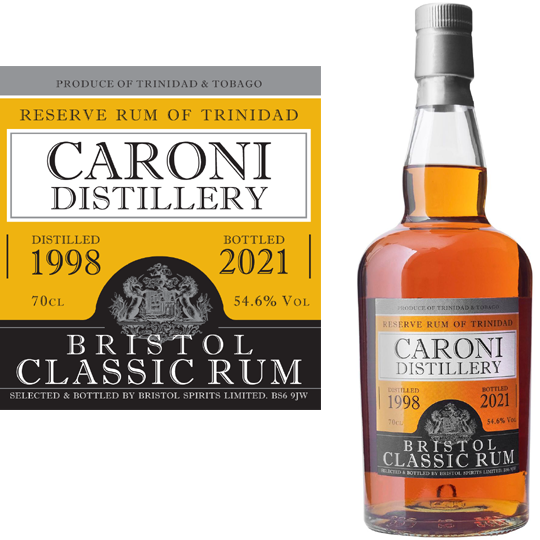 Rare and classic Caroni 1998 Rum, bottled 2021 offers a full golden colour leading to the distinctive Caroni nose with a touch of diesel and restrained wood influence.

Caroni is limited & extremely rare, when our stocks are finally bottled there will be no more! True drinking history!